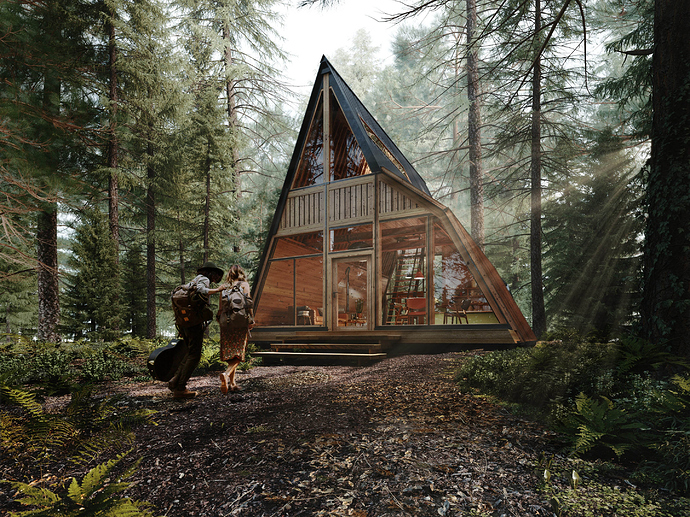 My final images of a woodland pine cabin shelter that perfectly fit into the nature surrounding it.

The reimagined shape of the classic A shape cabin goes with my vision with minimalist shape and everything that you need as basics for cozy living surrounded by nature and forest.

I choose a place in the Oregon woods. And there are few scenes was made with different lightning with FStormRender and Megascans assets give me so much chance to create visualization as digital photos.

Thanks Ronen for inviting me to talk. Such amazing new community. Finally I have more time to discuss more about entry. So much details inside a project that I wanted to reveal details, parts of design.

Looking forward to learn more from you here… I’m sure others are too.

I’m always sketching ideas and write notes. It’s like ok I have an idea to design house in woodlands, so let’s leave it for better times. But the main goal was how to do perfect shoot looks close to photo as inspired by Julius Schulman, Jens Risom prefab house and classic A-frame house and how to combine those add some reimagined design and that’s the shape.

I used FStormRender in commercial projects but never go with big, to made greenery, scattering and all render in GPU and what I can make from my single GTX 1080. At least their millions of scattered objects inside a scene.

But maybe most complicated part was lightning.

Sun rays go through trees and to find a right angle was so difficult. Every time-tested and no… not correct, ok let’s try again and again so house become in the shadow area, or vegetation plants not correct lighted, or it looks not well, and after few tests, it’s like ok. I found correct lightning, that’s perfect, it may work. So there are few scenes made with different light and setups.