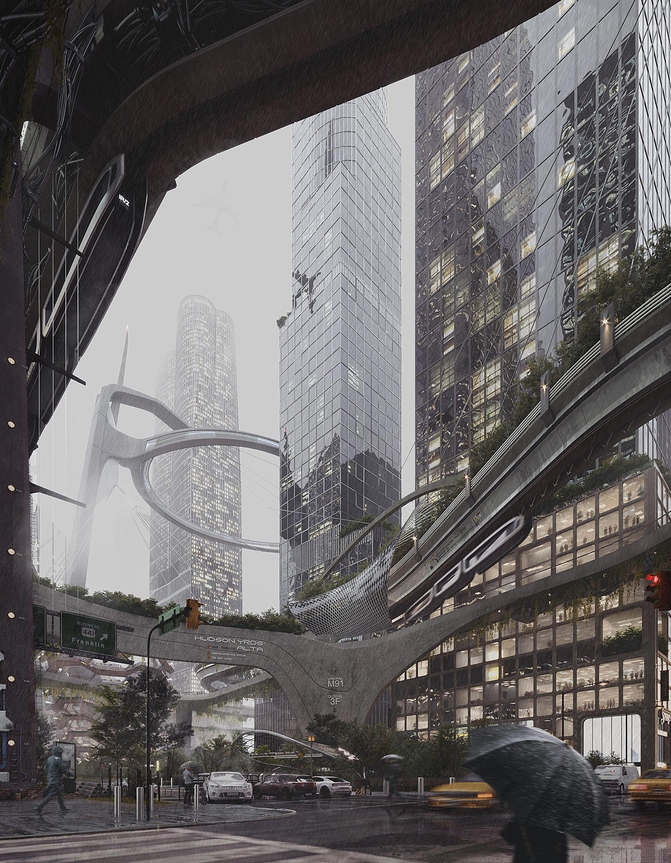 Imagining Architecture as a movie or a memory flash back, we see how the human urban development has reformed from horizontal expansion to vertical expansion pattern, as a methodology to maximize profits, and make the best use of our limited resources such as Lands (reachable-view-value-location-services) instead of the early urban Utopian cities that imagined heaven far from our life city centers, where we have less pollution and more greens, the lower building levels and higher quality life values.

In fact this is how i imagine New York in 20 years ! it’s not gonna be bad ! But not as bright, life within 20 years will not change that much but humans will keep trying to overcome the existing feeling of horizontal expansion (which is a must sooner or later to avoid congestion), taller, agile, glossy towers with connections, bridges and some of that, a life that will expand more and more vertically, to respond to our higher density withing the congested-remaining city, within its services, buildings and existing infrastructures.

On the other hand humanity will keep using our old infrastructure ! Because come on nothing changed yet ! But less light, less attention to the those old streets, less clean and unfinished works everywhere, A real contrast of old vs new life forms, different technologies but still seems familiar, like seeing nowadays an electric car, seems a normal car ! But with a closer look in sounds different it has no compositions, no drag no noise ! Its electric.

With the observatory in the middle i tried to imitate the attempt of contrast a soft new modern structure than penetrates the existing gap, the gap between the towers, it’s our way as human to breath, break the habits and make an impact, it’s our way to overcome the hardships and see through the dark ! Yet its still possible to beat the dark.

Finally, this vision may not be real, it is not positive too, and yet to know its just a theory, but due to our life today am kind of skeptical about its bright future, hope am not too dark, but with such a healthy skeptical dose towards the future we may have a brighter one, and thanks for allowing us to be in such a very ingenious and amazing challenge.