Final Entry - Seven Chapters Of The Day by Nenad Nacevic 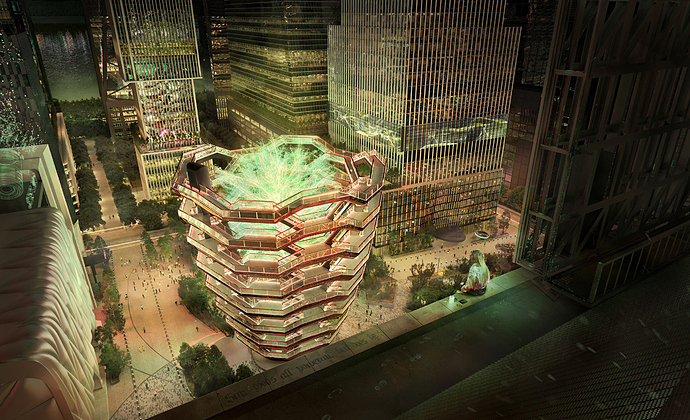 Seven Chapters Of The Day

My intention was to present the cyclicality of the day through its 7 phases. The transformations that space goes through are related to the lighting variations, change of utilization, shift of events, space occupancy density,…

I_The storyline starts with our main protagonist who goes to work. Above her head is Torus – a futuristic phone replacement used for advanced video call projections, health monitoring, or simply like a GoPro. The origin of its shape comes from the symbolism and appearance of the aureole. Hudson Yards will be influenced by various technology and screens implemented on the buildings which are not there only for commercial purposes but their role is to remind the population to slow down, take a deep breath, enjoy creative interpretations of nature. “Wake up” message in the sky is a reference to the movie “Mr. Nobody (2009)”. On the display below it, the invitation to the party indicates the development of the following events.

II_The golden sun is setting below the horizon. Musicians lead a Balloon parade that passes through the city and announces the upcoming celebration. Curious passers-by gather in increasing numbers. The workers diligently set the stage and make the final preparations.

III_The main vessel became a carrier and the protector of the holographic tree which is representing the dual nature of the future life. We can choose the way we want to participate in everyday life, be physically or electronically present. Glowing Stevi-cola traces re-introduce us to our protagonist sitting on the edge, looking at the night landscape from a perspective that is unusual for an ordinary observer.

IV_The celebration began in all its glory. People have a wonderful time celebrating life, colorful confetti erupts all around them while the lead character of our story plays music from the stage.

V_Party is still going, buildings in Hudson Yards have become alive, shining in their splendor. Lights incorporated into the facades and animated waves on them illuminate the entire hazy city block.

VI_The sun rises and a new day is born. Workers are packing the gear and robots are cleaning confetti and flyers leftover from the party.

VII_The light of the fresh morning opens the seventh scene. A passing plane indicates that one cycle has been completed and announces the start of the next round of life events.