While I was trying to think about how I’m going to convert my building to something new, I thought about pretty much everything, and I came up with the idea of an actual agricultural centre, as I mentioned before there is no agricultural centre where I live. So I merged this Idea and the new Idea of vertical farming in my building and I used its huge amount of roofed space for providing sunlight for the plants and crops inside. I removed the roof of the building which was made out of concrete and had no structural role in the building and replaced it with a transparent roof. Since this was going to be a research centre I decided to use the environmental spaces as well and planted as much greenery as I could including tea leaves (you can see them in the first image). And looking at some small researches I made on new technologies in agriculture, I noticed that they use drones to control the farms and even use them to spray all over their crops (you can also see the drone, one on top of the building and one airborne)

Making a water flow through the fields was necessary, so I used some tricks on cinema 4d to replicate whatever was in my mind.
The whole complex has two main buildings, one on the side and the other is the main place of research and farming (I used the building attached to the main structure for a small staff office, for disinfection and lockers) the building on the side is dedicated to offices and study labs)
Coming to interior place other than the platforms I made to hold more plants and crops and gain more space, I also designed rounded stands and scattered some grass and greenery on them, you can also see small pools and water flowing in the interior image. I was talking about technology, also added robotic arms to harvest the beans and crops from both high and ground platforms.
Soft wares and plugins I used: Cinema 4d, corona renderer, speed tree, substance source materials, substance designer, substance painter, Forester and real flow.
That was pretty much everything I did in this project I spent so much time on the idea and what I was going to do with my building, and these are the results, I learned a lot during this process including substance suite and etc. it definitely improved me and was quite challenging for me and the most important I met beautiful designers and people in this community, I will share all my projects here in the future.
Best regards
Erfan 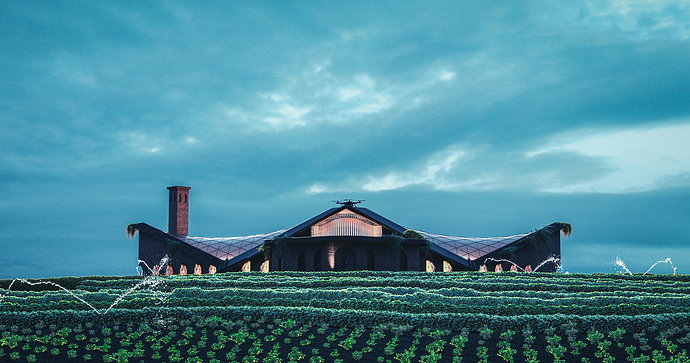