Glass igloos in the Nothern Lights by KirilloTRON 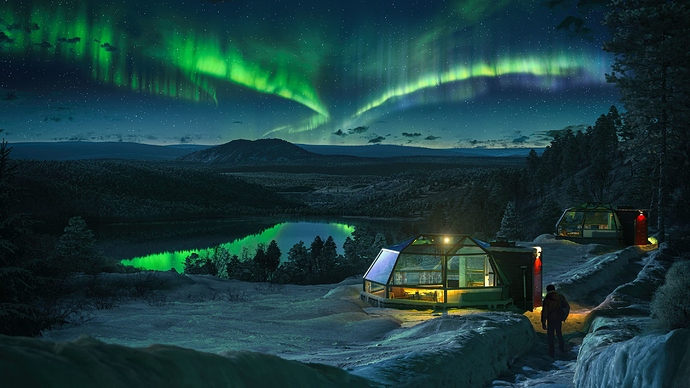 Back in September 2019, I came across an advertisement for a snow resort in the depths of Lapland. I was amazed by the concept of observing northern lights, or as they also know “Aurora Borealis” in specially equipped glass igloos and caught fire with the idea of making my own interpretation of this kind of recreation, besides I had little experience in creating large landscape environments, so it’s time for Bob Ross style.

You could say that I have stuffed a lot of bumps in the course of this work. The main difficulties I encountered were snow materials, the image of the aurora itself by means of 3ds max, managing large environments as well as the need to get the final image in 8K resolution for future purposes. It so happened that this project I was engaged in from time to time and what began in autumn, lasted more than six months. During this time I managed to make a project for which also had to work with snow, which led me to the decision to finish this work.

The auroras proved to be quite a non-trivial task, given their methods of origin, the height at which they arise, and their overall impact on the lighting of the environment.
I didn’t really want to do them on the post, because it wouldn’t help me with the self-education that I always try to follow.
It turned out that there weren’t too many methods and lessons to create these things freely available. Various methods have been tried, ranging from splines with noises on top of them to particle simulation. The latter was the most physically correct but consumed an unreasonable amount of resources that I don’t have.

In the same way, I had to optimize the resources of the scene by assembling the final renderer of several, splitting the scene into the background, middle and foreground, as well as the main one, both to save memory and because of the limitations of the Corona Renderer on the rendering air perspective. I guess after all this, I’ll probably do some making off of how I did this project because there’s more to share on the way to the finals.

Because of the latest events in the world, it was doubly nice to try to depict what we are now deprived of. Outdoor walks, freedom to travel and the simple joy of natural phenomena.
I hope that by looking at this render you can, even if you are at home, feel the comfort, majesty of nature and clean winter air, which I tried to convey.