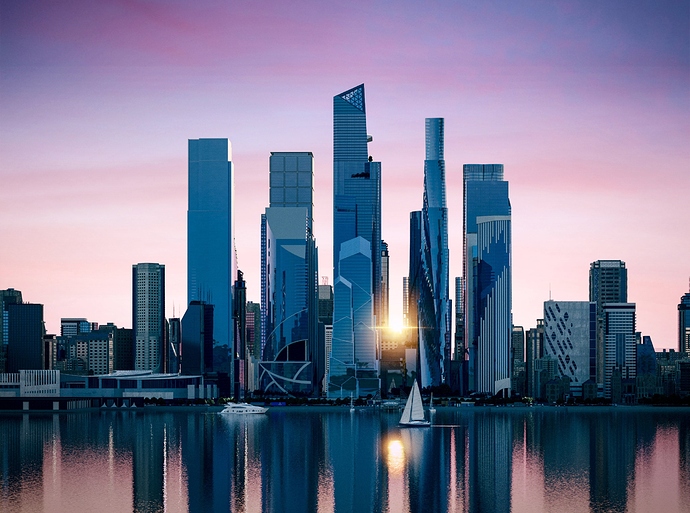 Hey everybody! I want to thank Ronen Bekerman, Tomorrow, and all the judges for organizing this competition again. I had a blast working on this project and I’m really excited to showcase the images I created for it!

I’ve titled my collection “2040: The Lessons We Have Learned”. It wasn’t until a worldwide pandemic affected me personally, that I knew where I wanted to go with this project. I was laid off from my job due to economic issues but was lucky enough to get called to a position selling beer to-go for a local craft brewery. After a month of our taproom being closed due to quarantine, we reopened for service. It was ultimately my observations of the general public that sparked the idea for “The Lessons We’ve Learned”. The way we interact with each other has changed and I was inspired to see how that will impact us in the future. New York has been hit especially hard by Covid-19 and we keep seeing images of deserted streets and hearing news of lock-down and infection rates. I needed to show a bright future for New York City with people interacting with each other and their city. By 2040 we have learned from the events of 2020 and we implemented measures to help curb future health crises. With this in mind, I’ve shown an active city with bustling crowds and recreational activity. I placed the new automated city sanitation robots and revolutionary no-contact drone delivery in most scenes. The scenes are lively and bright suggesting better days on the horizon. I’ve done my best to give you a thriving, optimistic city twenty years in the future improved by the lessons we have learned from today.

“The Lessons We Have Learned” is also a reference to my experience working on this competition. Scale-wise, this is the largest project I’ve worked on and there were some hurdles I had to navigate. With dozens of background buildings and hundreds of assets, I had to find a way to keep myself on track and efficient. Rigid asset organization became essential to keep my view-port running smoothly and make multi matting easier. Proxying everything helped conserve RAM during rendering. I also installed an additional 64GB of RAM to my machine to cope with memory availability during render, this allowed me to efficiently work in Photoshop while rendering frames in Max. I wanted to make a fully 3D scene because I hope to come back to this project later and play with weather conditions, animations, and new views. While I have tinkered on original residential projects, I’ve definitely never designed a skyscraper from scratch. I spent a lot of time looking at photos of the existing/planned buildings for Hudson Yards and other large scale towers. Some of my buildings are completely original concepts, and some take cues from other modern architecture. I didn’t expect to have so much fun sketching out concept buildings!

I knew from the beginning that I would be creating a series of skyscrapers in the Hudson Yards neighborhood to fill out the empty blocks on the west side. We were provided with a good conceptual site plan so I used that to layout my buildings. I didn’t want to interfere with the subway depot that is currently there, so I lifted the neighborhood onto an elevated platform. I also added subway terminals, a large ramp, stairs, and sidewalk level elevators to make Hudson Yards easily accessible. I designed the new buildings so that they are distinctive, but fit in with the existing architecture and currently planned structures to make this neighborhood stand out even from a distance.

I’m proud of the work that I’ve done in the competition this year, and I hope everybody enjoys it!

I should have tested the formatting before posting… I copy/pasted from my PDF into the text box and somehow the line breaks got messed up. Also, there was originally an error uploading my PDF and it looked like my images were gone as well, so I re-uploaded them. @ronen I know we can’t edit posts, but is there a way for me or you to fix the formatting and duplicate images?

Continuing the discussion from 2040: The Lessons We Have Learned: