A Pool House with SketchUp and Lumion

As I keep testing and implementing Lumion in my workflow, I did this test for a client. A simple pool house modeled with SketchUp and all else was done inside Lumion + some subtle animation which a like a lot!

These are some SketchUp viewport views : 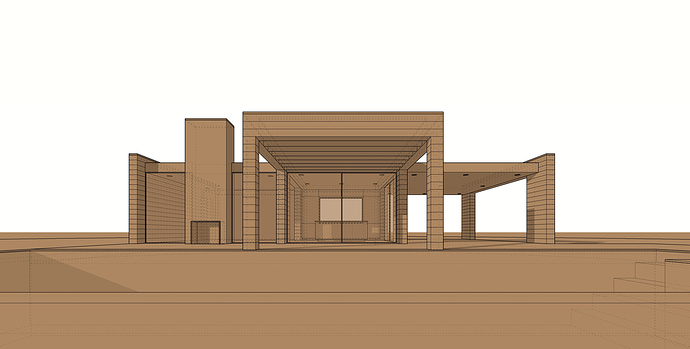 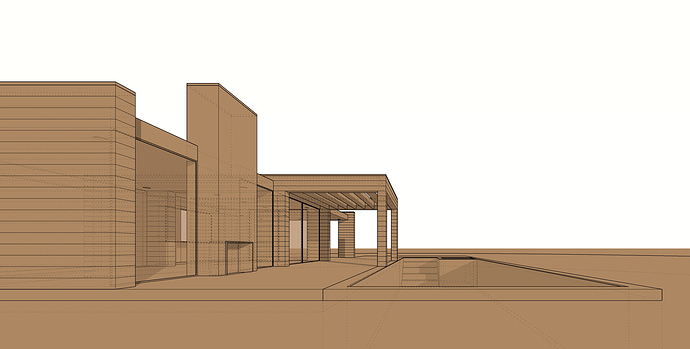 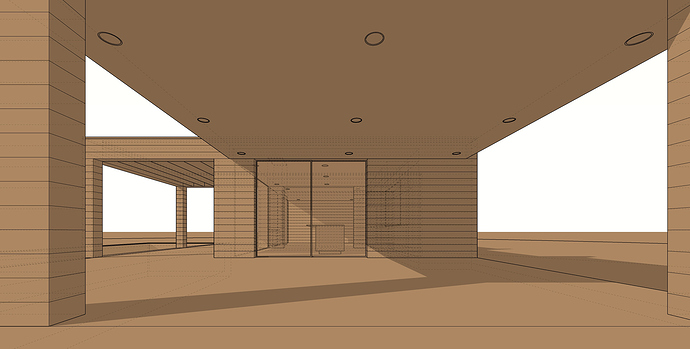 Stills with some Photoshop… 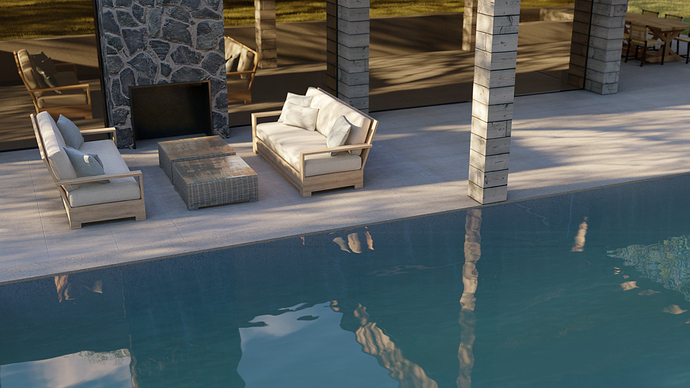 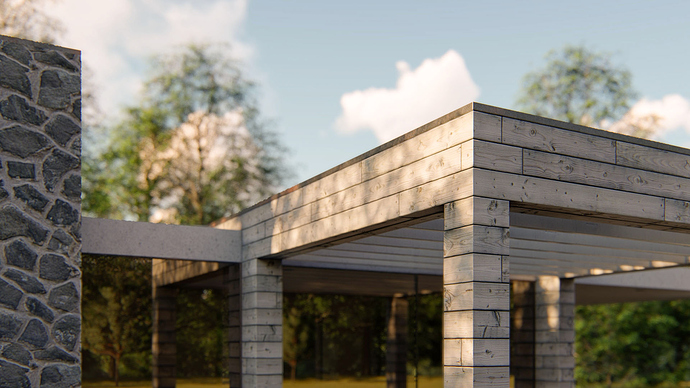 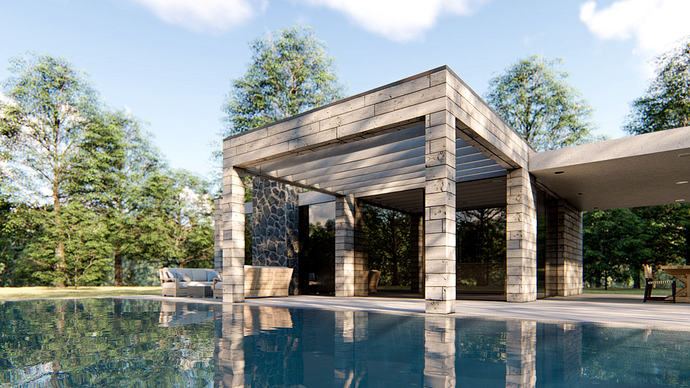 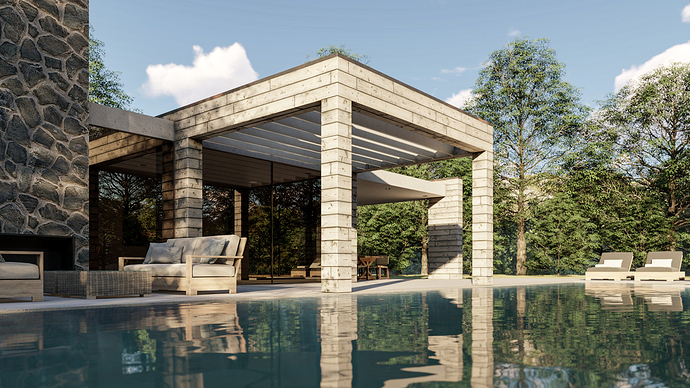 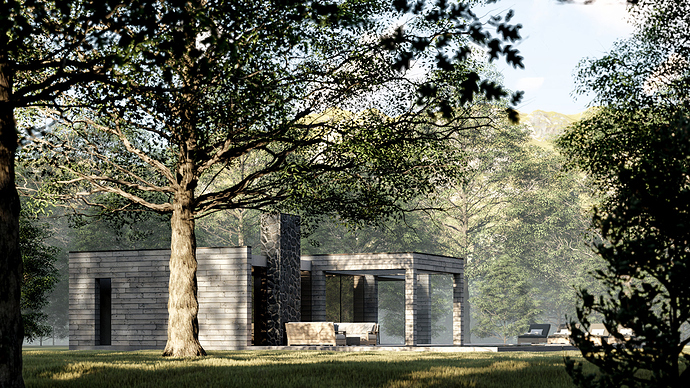 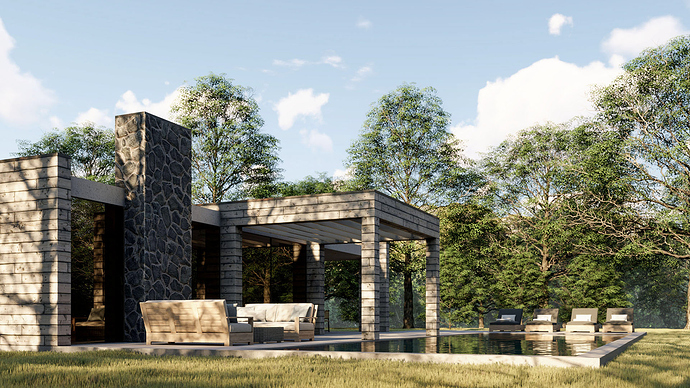 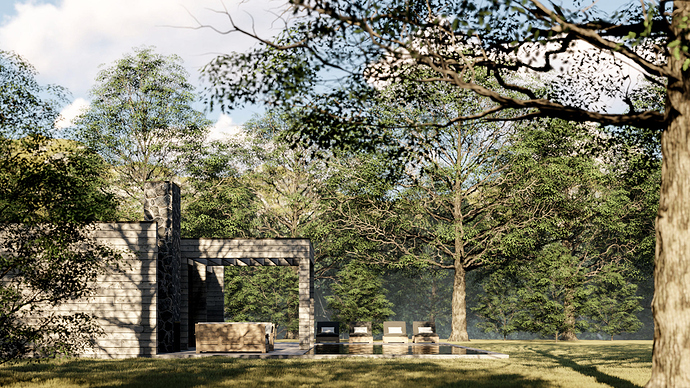 And the subtle animation…

I can’t believe how far Lumion has come on. I’ve been looking to potentially move to the gaming platforms like Unreal for animation work but Lumion seems to be producing similar quality and it’s geared towards architecture. What’s the integration with SketchUp like?

I’m also “hovering” in between Lumion and game engines like UE4 mainly.

The integration with SketchUp is amazing since Lumion 8.3 came out. The Live Sync feature works very well and whatever I do in SketchUp on one screen I can see with no apparent lag on the other screen with Lumion.

The ease of use and how fast you can turn things out with Lumion is a big thing, but there is a big caveat to this… Lumion is a CLOSED GARDEN!

For most things, it is not a problem. It is the long-term and professional archviz pipeline I am worried about.

I think in the long run Unity and Unreal look really promising as it’s so open. I’ve been trying to test out the Unreal Studio workflow as i had a couple of really promising tests with Datasmith, bringing in some smaller projects but recently my antivirus software is stopping it from working and I haven’t had time to work around it. Have you had much luck?

If you have some stuff to show already, please do in another thread

Hey Ronen, you’re quite right about the closed garden, and I’d say it is also a dead end because you can’t export the model once it’s inside Lumion.

As part of my role I have to constantly test new technology to be implemented inside my office so I’ve used Unity, CryEngine, UE4 and Lumion. I’m pretty vocal regarding the pros and cos of each software and I agree Lumion has been improving a lot, they’ve been adding more realism to their engine…to the point that it’s almost a full circle with offline renderers. For instance, when you apply all of the filters, effects, resolution (1920x1080) and anti-alias the time per frame drops dramatically. I’ve had frames as long as 1 minute and 30 seconds, which is quite funny because my Vray settings for animations vary from 45-120 seconds. Let’s be realistic, yeah Lumion nowadays looks ok but it won’t look better than Vra/Corona, so what’s the point of using it? The skill level, you see, visualisers require technical and artistic skills, and not everyone can create imagery as we do, so it’s very common for architects to try to visualise it themselves but everytime that had happened I’d had to re-render from scratch using either Vray/Corona or UE4.

And when I suggest “hey why don’t you learn UE4? I can teach you” the reply is always the same “UE4 it’s too hard” That infuriates me so much because my company is paying thousands and thousands of dollars just because people refuse to learn something new? Let me remind you guys that UE4 is completely free for our industry since all we produce are images and videos.
There are tons of free resources to get you started and if you really require it there’s Datasmith which allows you to have live link and other useful features.

Hi Alex,
I got your point, and at my company, I’ve got similar to your position.
For me personally, UE4 is not quite ready for mass use and daily jobs. We’ve had few enquiries this year for UE4 projects that we end up to the following conclusion. Each project was going to cost US 3 to 4 months worth of work and around 20K euro. As the deadlines were quite short for the scale of these projects. So we ended up with proposals more than double the client’s budgets. Even with Data Smith being implemented it’s still not that fast as it has to be.

So my point is at the end of the day we have to find a way to leverage everything.
Cheers

I think UE4 is market ready but not our market yet, it was intended to develop game after all, Epic are really keen to make the engine more friendly to use but still is quite a beast hard to tame uh?
I also understand that quoting it could blow up the budget, but at least in my case, it was the same at first because I was just learning it and after a year or so I was producing renders and animation in 1 or 2 days (this project for instance). I took some time for me to build a pipeline and a robust assets, templates and materials library.
So we currently only render animations using UE4 but stills are 50/50 with Corona.

I agree with you, at the end of the day you should use whatever you feel comfortable with.
Cheers

Got your point. But I still can’t understand how you can work with production quality in short deadline with UE4?
I know a bit of UE4 but as I see maybe it’s not enough. I’ve read your forum thread… how,but…why…that scene in 3 hours?

Yeah I know, my deadlines are insane. But you can see the quality is ok but not great due to the limited time. I should upload better examples of UE4.

I guess the term production quality is relative also?

I don’t know about UE4, but with Lumion I’ve been doing 1-2 days sprints with several stills + short animation for competitions (not even competition really, more like a design pitch to get initial go ahead). And I’ve been doing this since Lumion 1 or 2 was around

While we, as 3d artists, like to get all the bells and whistles in… all the client wants is to get a green light as soon as possible for his project since he pays interest on his money each day that passes! Think about crunching a concept pitch from weeks to a few days.

Yes, since Lumion 6 was introduced we started to use it for the same purpose - pitching in the beginning of the project