“technological advancements […] adoption by content creators […] re-evaluation.” I’m going to focus on that part of the brief. Some key words are coming to my mind quickly, a blur, a cacophony of ideas; creating and manufacturing, forging, production, mass production, automation, computing, data, big data, very big data, and then even bigger data, networks and webs, converting and converging, adoption and adaptation, manual, automated, globalized but isolated, shared or owned, monopolized, democratized and decentralized, free or subscription based 😉

Here I am trying to uncover spatial relationships between past, current and future industrial trends, often catalyzed by or bundled into “revolutions”. Especially in the context of generating art, creativity, collaboration and how we, as a collective, use and occupy physical space to perform all those endeavors.

I’m not working with any existing site, as I’m mainly focusing on the meaning of this space and what it may (or may not 😉) convey.

As for technical aspects, in case anybody’s wondering – I am using Unreal Engine + Houdini combo because they love each other and I love them too. Just as much as Substance Suite. RTX is ON, because why not, and so is DLSS, because it’s there and you should use it as well. I think I’m going to stick to CPU lightmass as it gives me better results than GPU lm, at least for now. I am aiming for weekly updates but we will see how it goes, things can get iffy and hairy in UE pretty quickly lol xD

Getting right into it with something between concept ideas and WIP images already:

Rolling off of first place Nvidia contest to the next one, i see? Good to have you here. How would you be using Houdini in your scene? is it for parametric modeling? No Omniverse will be used?

Going to keep an eye on this one!

Oops, you got me! Thanks for the kind words

Why Houdini? Several reasons but mainly because I want to get better at it and there is no better way than through a real project. It’s a fantastic piece of software. After some years of working with UE4 and SD I felt like at home with nondestructive workflows and node based systems. And VEX really is not that scary. Due to the fact I’m focusing on real time graphics theses days, Houdini was the natural choice with its integration through Houdini Engine, HDAs and all the game dev tools already inside. I cannot praise it highly enough – it’s a fantastic way to work on CG content of any kind.

As for me and the Converted project, I am using it mainly for modeling all the assets (excluding furniture - just optimizing models provided by some manufacturers), UV unwrapping, some simple cloth sims and a few HDAs for UE. Parametric and/or procedural modeling is basically its nature, it’s just how it is, definitely contributing to the overall speed and painless iterations. However, I still prefer to build some objects through blueprints when distributing assets and baking across the scene.

BTW, I see you are going with real time as well, @simplychen. Good choice! I am following your work as well, great modelling so far, keep it up !

Regarding the Omniverse – I won’t be using it for the final submission here simply because of the real time deliverables. I hope for issuing a free roam virtual experience (not VR, just desktop). So far I’m getting reasonable (not ideal…) frame-rates after packaging, at 4K, with DLSS and RTX on, running on 2080 TI. I stay hopeful but we will see how it’ll perform once the scene gets fully populated. That part scares me a little bit

To wrap this up - here’s a bunch of latest snippets from the hall. It has grown a bit since last time. A few simple Substance material already in there too, just to get the feeling right. Also trying to find suitable furniture: 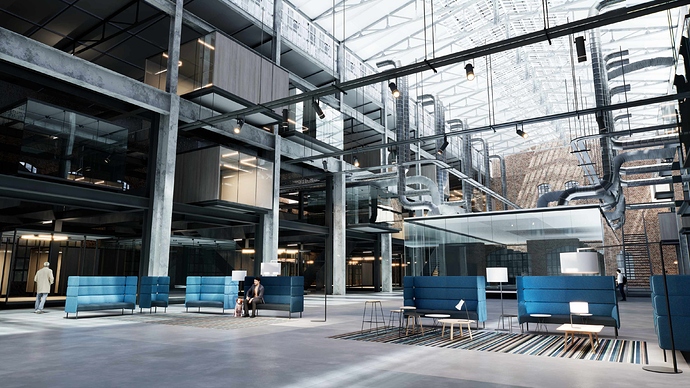 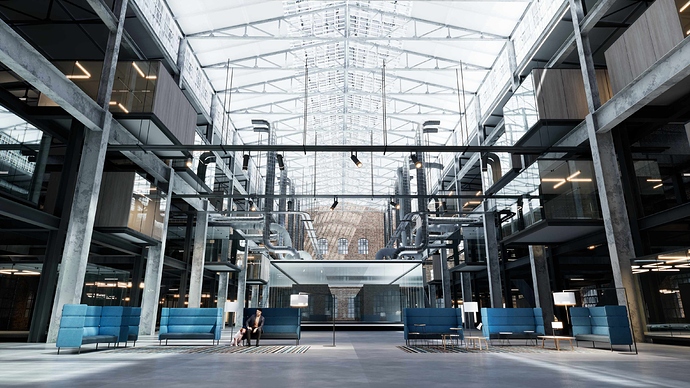 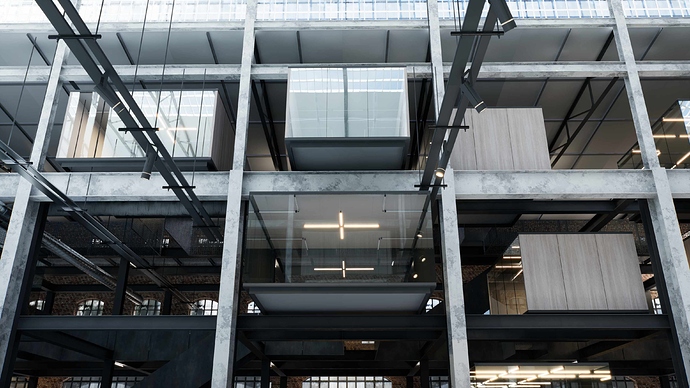 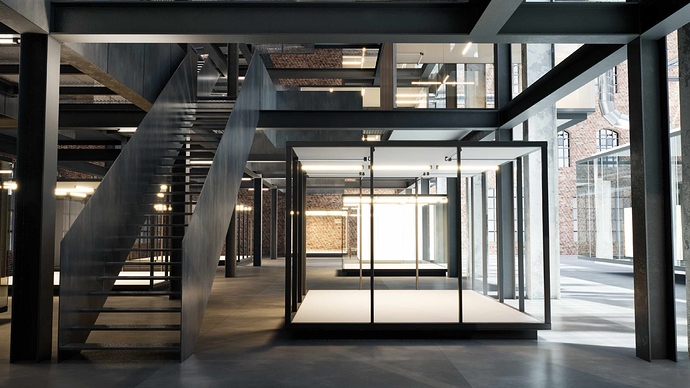 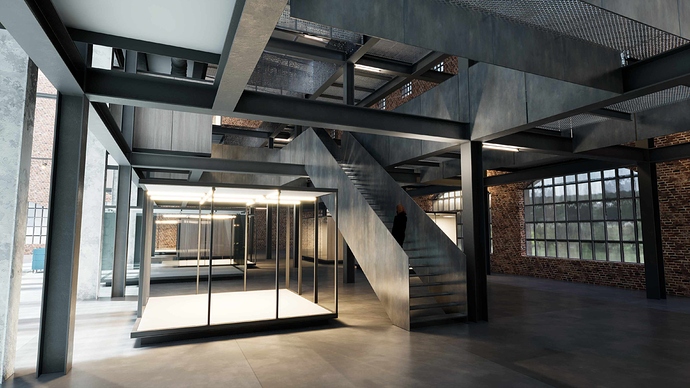 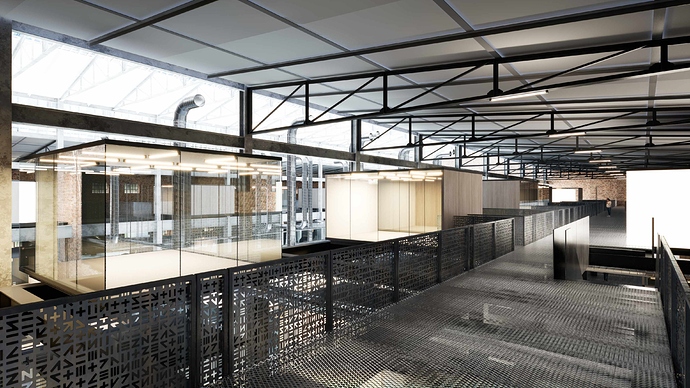 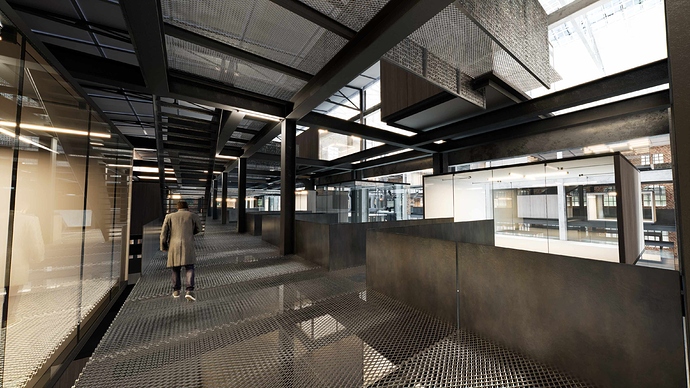 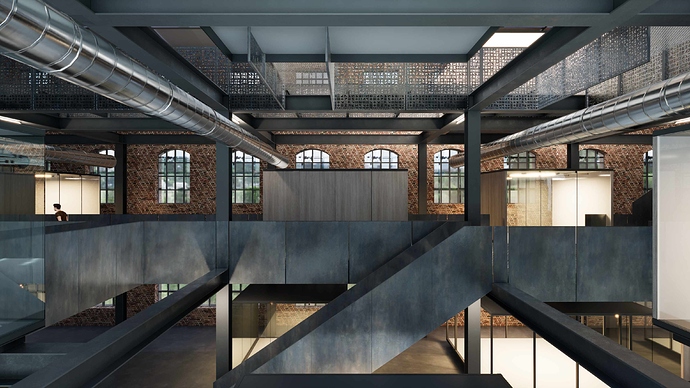 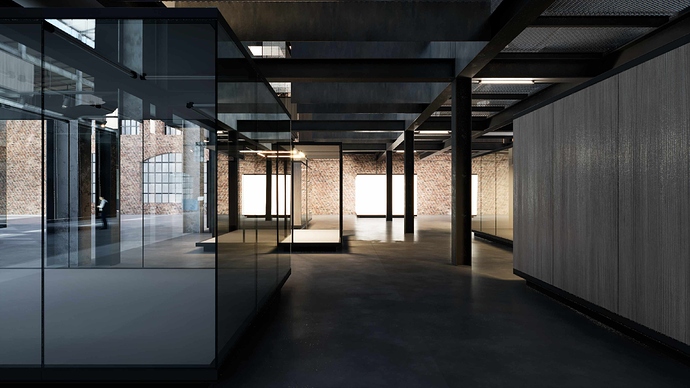 Wow, you are already ahead, loved your first shot of the place.
I’m sure it was challenging to detail and divide the space here.

Hi @msum Looks like you’ve done loads already! - was this building based on an existing space you know or something you created from nothing?
Looking forward to seeing your next stages

Who’s ahead or behind is a bit relative, isn’t it? I suppose it all depends on the end goal. I think mine is still rather far away. Up till now I’ve been throwing in volumes, objects, simple shaders and testing if it works or not. I find it very easy to validate ideas quickly in UE. Also, instead of locking down specific stages of the process (like modelling first, then lighting, then texturing etc.) I try to do a bit of everything at the same time and keep refining various elements depending on the need along the way.
Here’s where I’ve got so far: 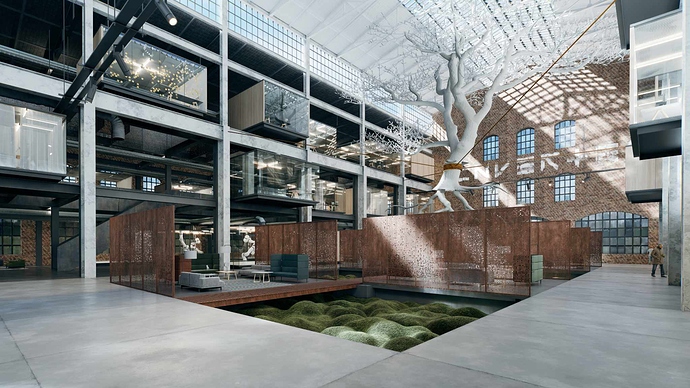 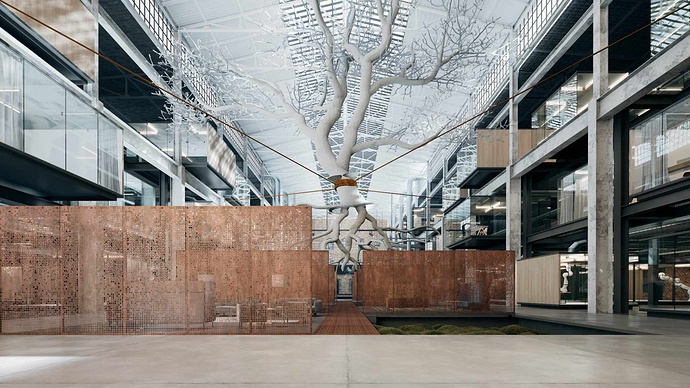 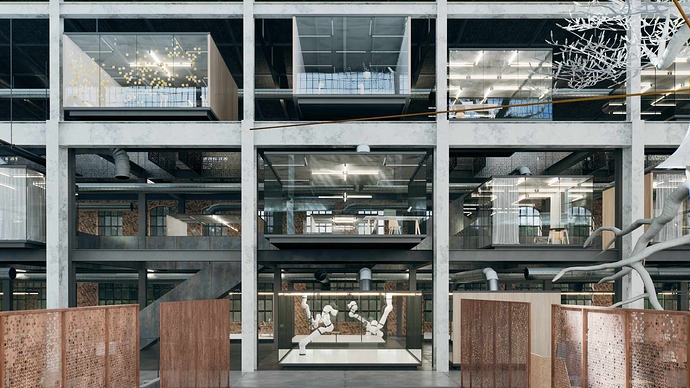 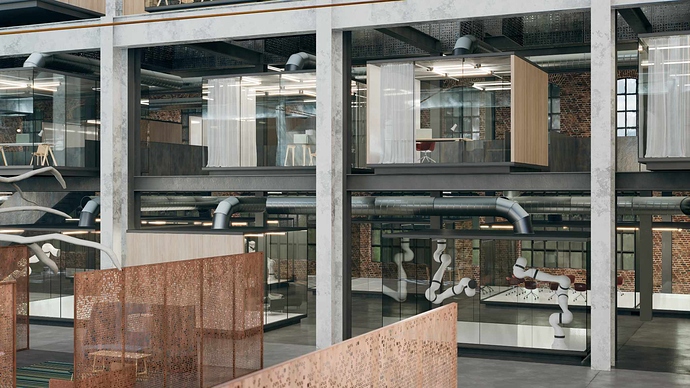 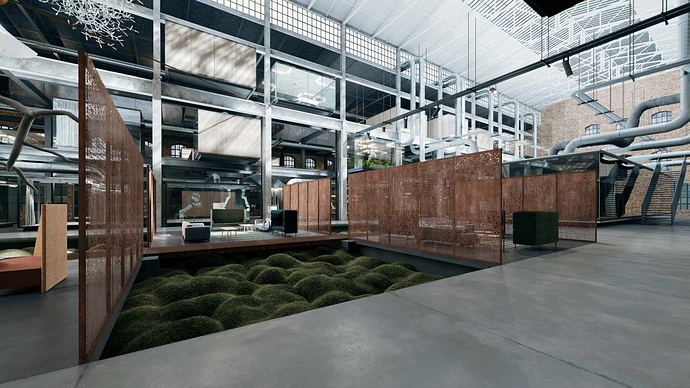 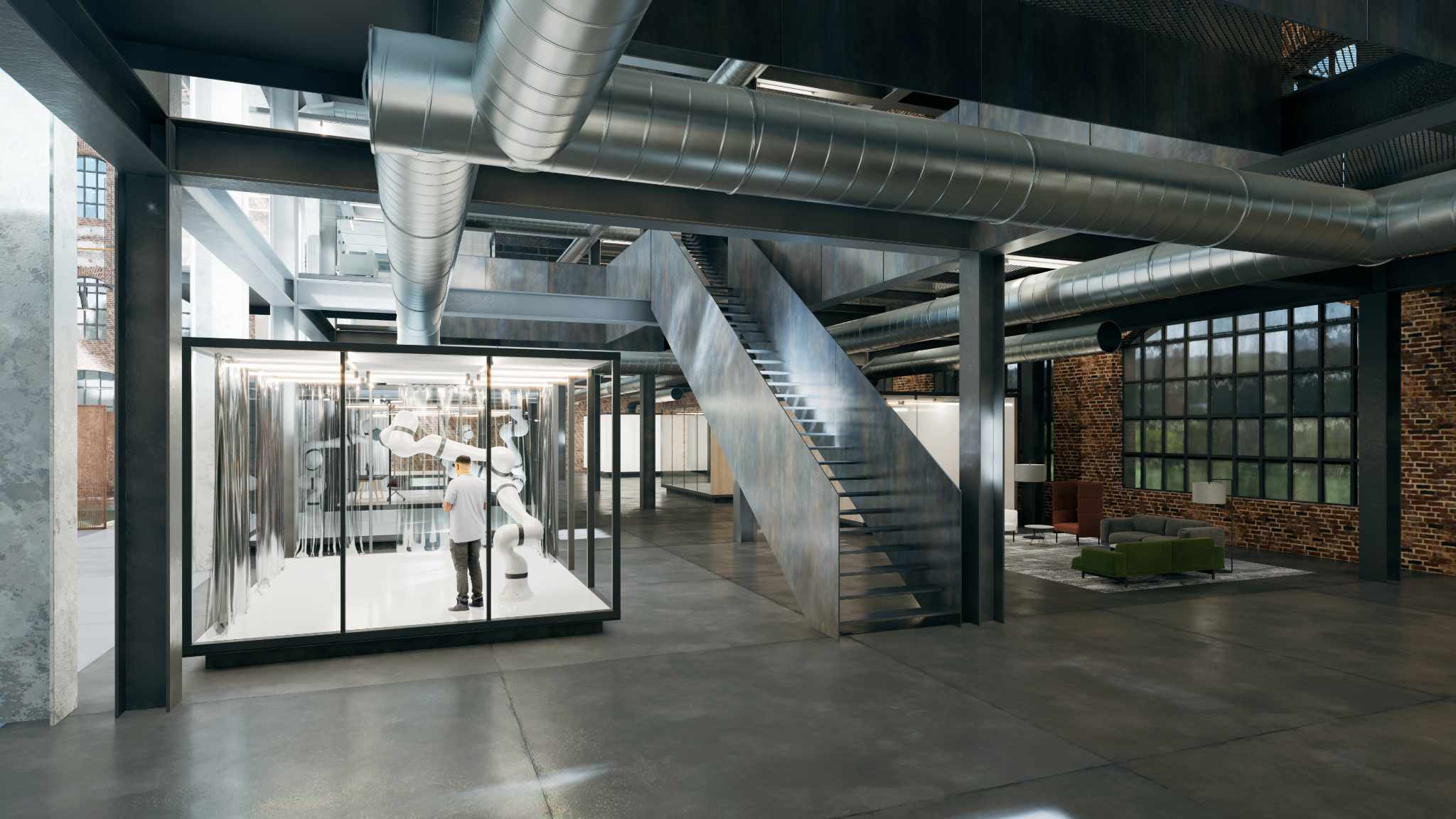 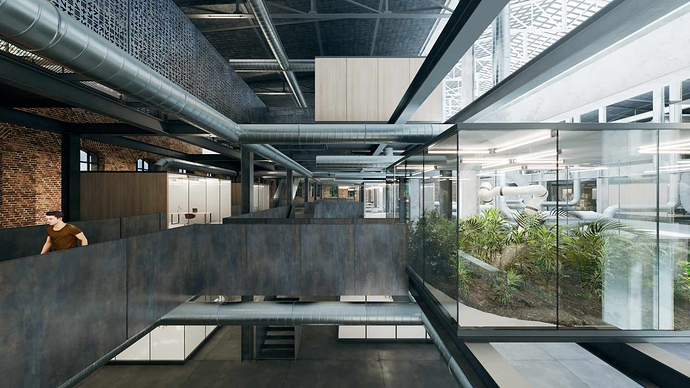 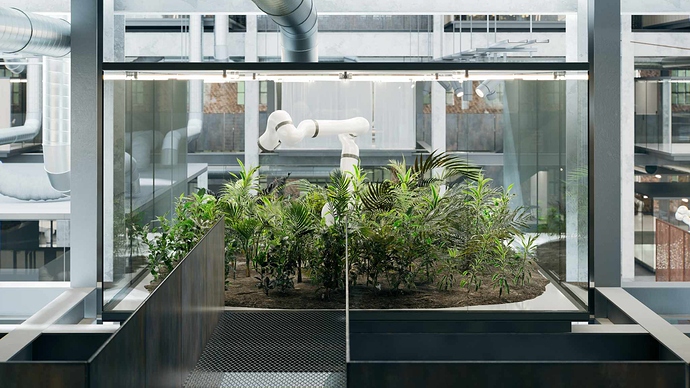 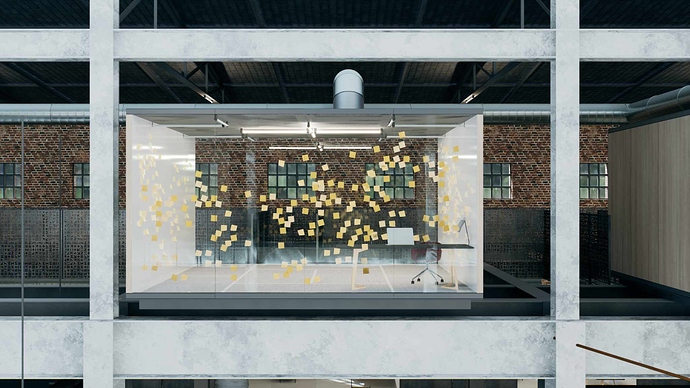 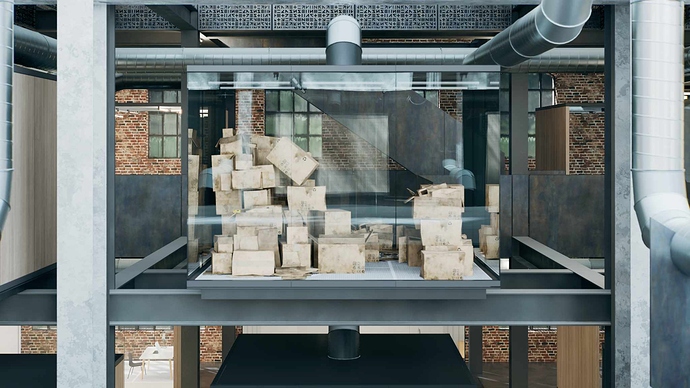 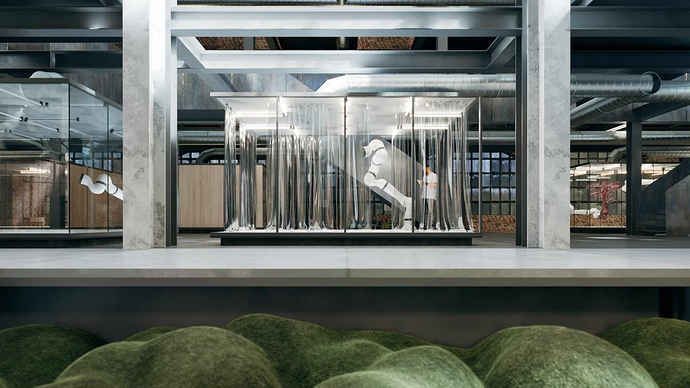 And some Substance Designer goodness, rendered inside SD: 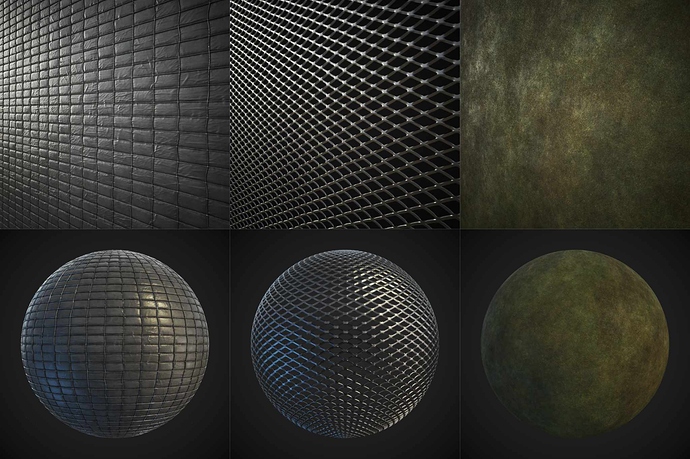 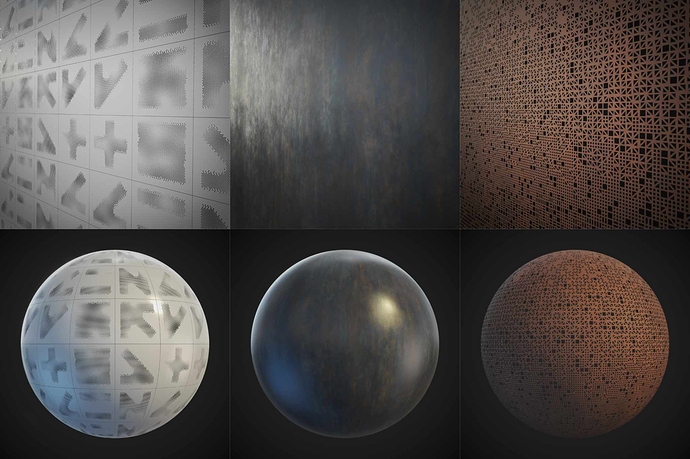 @Flowstorm, this is a completely imaginary space. I hope that’s not against the rules, is it @ronen ?

Like I mentioned before, I am focusing more on the idea itself of converting physical spaces around us (including the big blue dot). Why do we do that and what processes stand behind it? How did we deal with it in the past and what could it be like in the future? There’s been a lot of buzz lately about the fourth industrial revolution and that idea has been stuck in my mind for some time now. That explains why I chose an old factory as a hub for a new form of industrialized creativity, which has gotten democratized largely during past 5 or 10 years. While I was developing this site throughout last week I started drifting away slightly from my initial idea and thus I felt like I should go back a little and explain it a bit better. I realized I haven’t done justice to the “concept” part of the entry

At the start, I was trying to converge two, maybe three main ideas; industry, craft (or art) and power, most likely in the metaphysical sense (aka who’s in power now?). When overlaid those tropes on top of each other I ended up with a theme of a futuristic art-lab, a workshop of some sort in a 20th or 19th century factory that is sustained by modern tech and designed for contemporary artists. I started distilling specific ideas to narrow down the scope of the project, to find the right feeling, also key words, to get the focus right. I made a few simple sketches that turned out to be enough to start modelling in UE basic blocks: 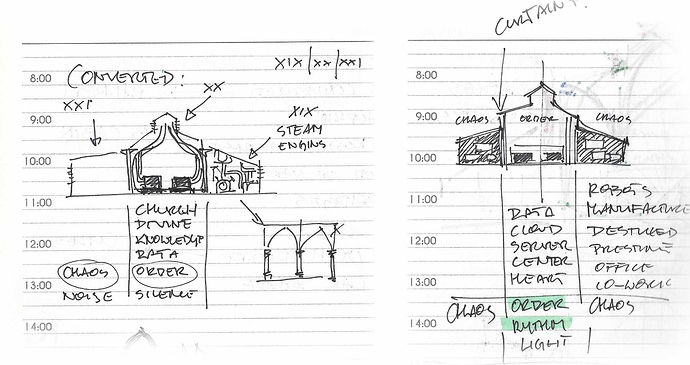 While browsing through references and examples, I started thinking about this factory hall as an abandoned temple or a church, sanctuary. Quite a few of those 19th century factories expressed neo-gothic or neo-classical qualities and details. Often times the light behaved also in a particular way, with vast dusty volumes and god-rays introducing more eerie or majestic looks. So it all started to rhyme, especially with the unknown meaning of the art itself. Sometimes dubious, sometimes maybe even divine. But most of the time ambiguous. 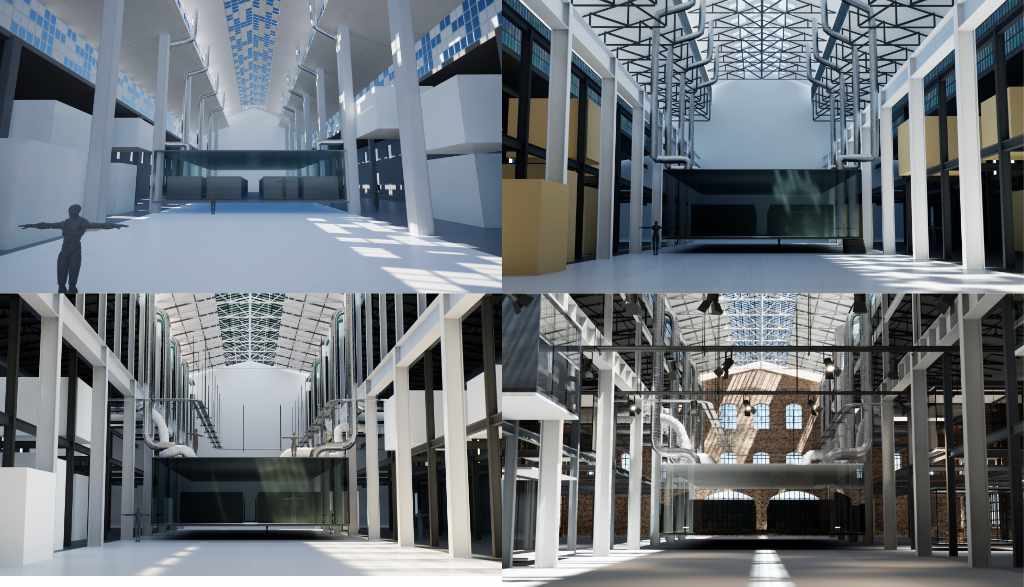 And so I dove in and started pushing and pulling vertices and flipping normals, hoping for a low polycounts and manageable framerates. In the meantime, the pursuit for the neo-gothic vibes turned out to be completely futile, it didn’t work at all from the very start. I, therefore, focused on the main idea of the collaborative workshop but the theme of a force prevailed and got substituted by good ol’ nature, juxtaposed with a data processing unit that fuels contemporary and future tools. That’s how I found a proper “filler” for this vast empty space in the middle of the hall. I guess a lounge of that kind doesn’t sound too odd in a co-working area. Although, I am not happy with the design choices, that will most likely change soon.

But that dead tree will stay. I mean hang.

Looking good @msum - so many nice interior renders. I like your ‘robot in the case’ - if I understood it correctly !

These are amazing looking renders! Pretty much final submission time, no…? I’m still not 100% clear in my head what I’m building, and feel WAY out of my depth. Onwards though.