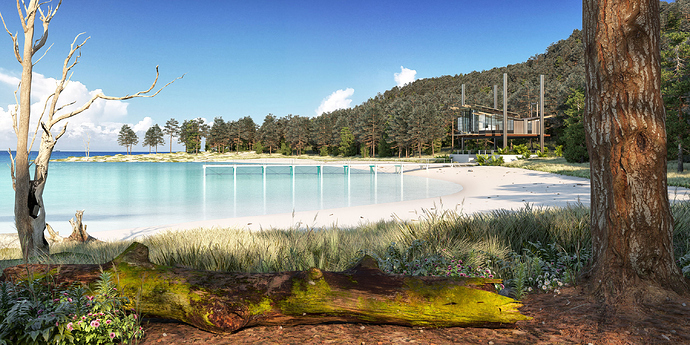 The project has adapted quite a lot over the course of the challenge. Starting off with the idea of a swimming pool floating in the trees and imagining a house to go with it, the central concept was not wanting to choose whether you sited the retreat on the forest floor, in the canopy of branches and leaves or floating above the forest looking to the horizon.

The initial design was a pragmatic use of shipping containers on a pulley structure system using the living areas to counterbalance the sleeping areas. I felt I was getting a bit tied up in the pragmatics for a concept so I redesigned the cabin looking more at the quality of light and space inside to lead the way. My focus was oriented primarily around the design of the cabin to start with.

I don’t have much experience in environmental design and not having a real site in mind I tested a few ways of making a realistic terrain, with several failed attempts at terrain generation I settled for some newly acquired poly modeling in 3ds max as the simplest solution.

Eventually, I had something to work with that followed some initial sketches of what I imagined the main camera view being. I then started texturing and populating the terrain using Forest Pack and some assets from Quixel.

The main issue I had after everything was getting the environment to extend to the horizon. This didn’t matter so much for the still images as I could edit this part, but for the spherical renders this wouldn’t work, especially as the images Yulio produced didn’t like being tampered at all.

The house crept closer to the water to enable a better view of the design however the original concept was to mask the support structure within the trunks of the forest and have more “garden” space between the house and the beach, but I’m happy with where I got the project to in the end.