Pre-Final Update:- Seven chapters of the day by Nenad Nacevic 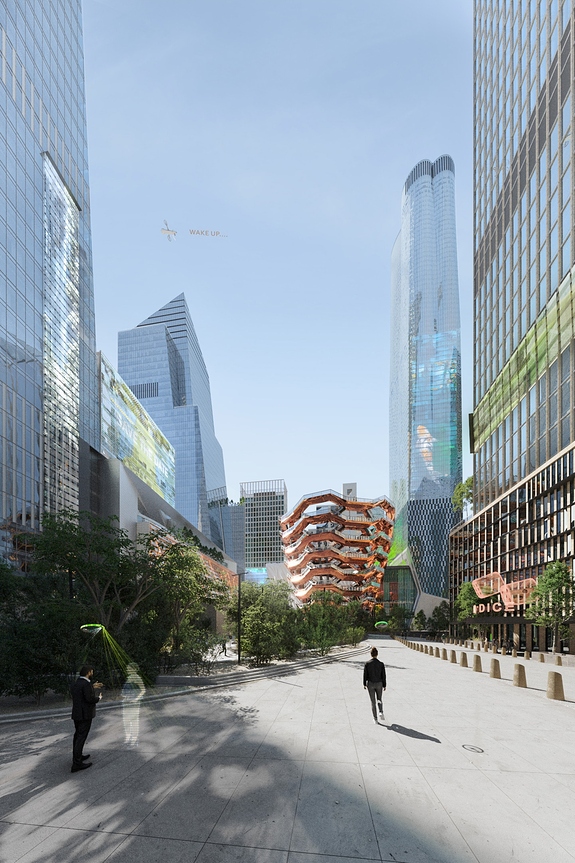 I would like to take you through the story that follows my visualizations.

In the first picture, we meet our main protagonist who goes to work every regular day. Above her head is Torus – a futuristic phone replacement also used for a video call (the person on the left) or like a GoPro. The origin of its shape comes from the symbolism and appearance of the aureole. Hudson Yards will be influenced by technology and screens implemented on the buildings. “Wake up” message in the sky is a reference to the movie “Mr. Nobody (2009)”. On the display below it, the invitation to the party indicates the development of the following events.

The second scene shows the golden sun setting. The parade passes through the city and announces the upcoming celebration. The workers diligently set the stage and make the final preparations.

In the third image the main vessel is becoming a carrier and the protector of the holographic tree which is representing the dual nature of the future life. The lower right corner near the “torus” and Stevi-cola will re-introduce our main character (will be added in the final image) sitting on the edge, looking at the night landscape of the Hudson Yards from a perspective that is unusual for an ordinary observer.

The celebration began in all its glory. People have a wonderful time celebrating life, colorful confetti erupts all around them while the main protagonist of our story plays music from the stage.

Party is still going, buildings in Hudson Yards have become alive, shining in their splendor. Lights incorporated into the facades and animated waves on them illuminate the entire city block.

The sun rises and a new day is born. Workers are packing the gear and robots are cleaning confetti and flyers leftover from the party.

The light of the fresh morning opens the seventh scene. A passing plane indicates that one cycle has been completed and announces the start of the next round of life events.